Sometimes I got cross with my baby blackbird because he’s so clumsy. I would see him sitting in the blackcurrant bush, take a peck at the biggest, ripest berry and drop it. He wouldn’t even follow it down with his gaze, let alone go and get it, but simply take aim at a new berry.

I felt this was a sort of breach of our “deal”. I let the birds eat as many berries as they want. I wasn’t so keen on them taking a bite and effectively chucking them away.

My blackbird would often sit on the ground underneath the bush, surrounded by berries he himself had dropped or which had naturally fallen there, and show no interest in them. When he wanted more, he would fly up into the bush and select a fresh one. I imagined him thinking, “no need to eat off the floor; there’s hundreds up there.”

I even took to dropping some of the bitten berries into the water I put out, so they were right there when he took a drink. But again, no interest.

Recently, I observed a female blackbird hopping around rapidly under the bush and one day I realised that she was actually gobbling up all the fallen berries. A deal saver!

It interested me to note that there were differences between the behaviour of male and females of the same species on such a thing. I came to think of her as his “big sister”; cleaning up the mess and making things alright. 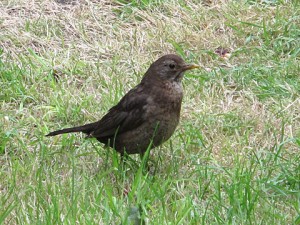