There’s a newspaper, called Metro, in England that I never bother to pick up, even though it’s free. It’s bland, with no depth to the news, no original reporting and way too much focus on “celebrities”. But today I made a point of getting one at the train station because it had a front page story about .... Marmite!

Marmite may be unfamiliar to Japanese people but it is possibly the product with biggest brand name recognition in Britain. It’s a food, of sorts: a black, sticky paste that you spread on toast. Some people love it; a lot of people hate it. But it is somehow peculiarly bound up with our sense of national identity. You could say someone or something is “as British as Marmite” and everyone would know what you meant (i.e. very British).

I eat it once or twice a week usually but sometimes go months without eating it. But as a patriotic Englishman I always have a jar of it in my house. I take some offence if someone doesn’t like the taste of it or – even worse – refuses to try it at all.

Anyway, it seems there is a Marmite crisis.

It’s complicated but it seems that Unilever, the company that owns the Marmite brand, is attempting to raise the price but Tesco, the big supermarket chain, is refusing to pay the higher price. So there’s a stand-off and Tesco might run out of Marmite, which is an almost unthinkable scenario.

There’s a political context. Since the EU referendum, the pound has taken a battering so the price of imported foods will have to rise at some point (I hope I don’t have to explain why). BUT Marmite is British-made, so it isn’t being bought in Euros like French camembert or Aussie dollars like Jacob’s Creek wine.

So Tesco (and the British public) think Marmite shouldn’t be more expensive. But it seems Unilever would rather put prices up on many of its brands, regardless of their provenance, than do larger price hikes on only the imported ones.

It’s very rare that I would be so interested in a business story, and rare that Metro would run a squabble between companies so prominently. Marmite is hot stuff.

In Britain today we are all waiting to see what Brexit means. If it turns out to mean no Marmite (or unreasonably expensive Marmite) there could be trouble! 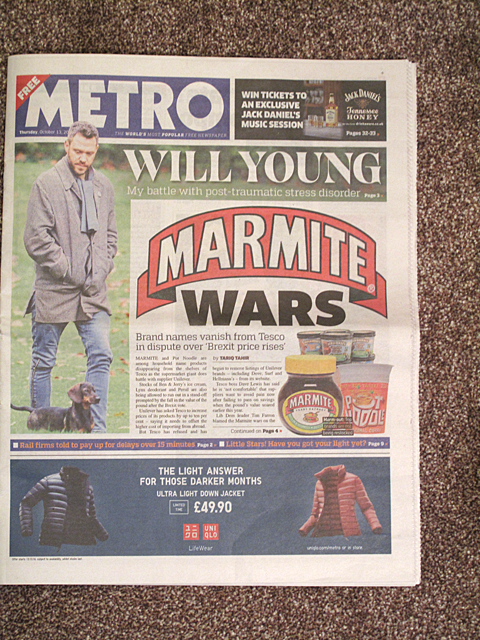