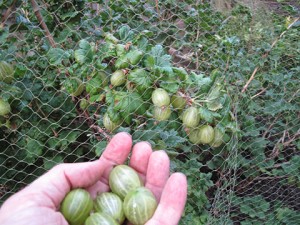 After the blackcurrants comes the far more manageable gooseberry crop.

There’s absolutely no deal with the birds on this. It’s a smaller bush – or actually two grown together – and I have draped it completely with netting so they can’t get to it.

Last year I reckon I collected about 80 gooseberries, so a handful or so a day, which I ate over a few weeks without freezing any for a later date. There’s no surplus to give away. (I don’t know how many blackcurrants I get but it’s probably over 2,000, by comparison.)

More importantly, the gooseberry bush is my proudest addition to the garden. The blackcurrant bush was there when I arrived. So was the apple tree, which is so prolific it is actually a burden to me.

My sister gave me a small gooseberry bush as a sort of joke because I had initially claimed to have one. Blackcurrants are green before they ripen, so look a bit like gooseberries. It was a cause of some hilarity in my family that I continued to believe for about two years that I had a gooseberry bush producing purple and black gooseberries (!) when in fact I had a blackcurrant bush.

So I planted the gooseberry bush and have watered and tended it for 4 years. This is the first year it has really paid off, sprouting somewhere in the region of 200 berries. That may not sound a lot but they are hefty – as big as grapes (though that isn’t the first comparison that springs to mind).

Gooseberries aren’t hard to grow. They are resilient and don’t need a prime spot in the garden. They are not a hugely popular fruit as they aren’t sweet enough to eat. They aren’t something people buy; I have only once seen punnets of gooseberries on sale in Britain. Usually people “have to” process them into jam to consume them, which is quite hard work. I just throw them into smoothies with other bananas and a bit of honey.

This means I sort of don’t know what gooseberries taste like. So it follows that I don’t exactly know if I like them. But that’s not the point: they are my gooseberries and I love them.